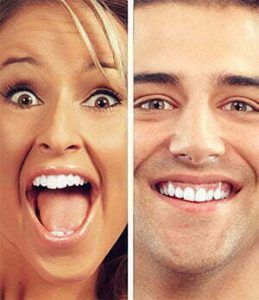 You’re likely familiar with Invisalign, which is part of the orthodontic family but very different than metal brackets (metal braces). Invisalign is a series of clear aligners that are customized to fit perfectly over your teeth. Kind of like night guards but much thinner and more comfortable, patients move through the series as their teeth are slowly re-aligned. Invisalign isn’t a good match for all patients, and only an orthodontist can recommend them, but they’re a fantastic solution for many people.

Since Invisalign can be easily removed, patients are allowed to take them out for a few hours each day (your orthodontist will tell you exactly how many). Most people remove their Invisalign to eat, for special events and for photos, even though Invisalign will almost certainly not be visible in photos. In fact, many Invisalign aligners aren’t even noticeable when talking to someone face to face!

However, the ease of removing Invisalign means they can also get lost. Metal braces or brackets can, of course, never get lost—they can only be removed by an orthodontist! You’re probably not very worried about losing your Invisalign aligners if you’re a responsible adult, but what if it’s your teen who’s getting them?

Teenagers are notorious for being forgetful, especially when it comes to items like healthcare. That’s why the special Invisalign Teen program offers six free replacement aligners, which is often more than enough for peace of mind. Your teen could feasibly lose all aligners in their series and get them all replaced (not that it’s encouraged, but parents know it’s possible!).

In terms of cost and time, Invisalign is comparable to traditional braces. Everyone wears orthodontics for different amounts of times, with a general ballpark of 18 months. However, your timeframe with braces or Invisalign could be less or more. Invisalign is also about the same cost as braces, and both Invisalign and braces may be covered by insurance. Otherwise, payment plans are always an option.

Is Invisalign for your teen? Call today for a consultation.